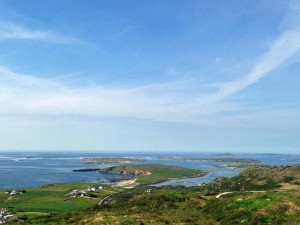 The Sky Road in Clifden is one of the most picturesque areas in the Connemara region. The circular route is 11km long and takes you out west from Clifden, onto the Kingstown peninsula, and back into Clifden via the N59. The peninsula is also a part of the Wild Atlantic Way driving route. Simply put, the scenery along the Sky Road is stunning. The route is well signposted from Clifden and easy to find. As you travel away from Clifden, you are going up-hill on the Sky Road. Not long after you see the Castle Gates, the road will separate into the lower and upper roads. The lower road goes downhill towards the sea and will give you a very close up view of the landscape, but the upper road is most popular because of the views it offers over the entire area. Here you will find unbeatable views of the Connemara countryside, the Atlantic Ocean, The Islands, and the coastline. There is a car park at the highest point with plenty of room to park and take photos. This is an area of unique natural beauty and we highly recommend that visitors to the area should experience it. 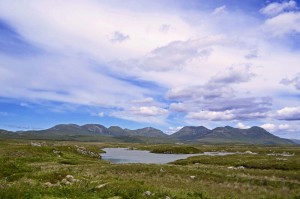 The Roundstone Loop is a wonderfully scenic drive offering spectacular coastal views to Roundstone, and returning to Clifden through the Roundstone Bog Complex, a lovely natural wilderness. The journey is 40km in total with lots of opportunities to stop off along the way to see the coastline, visit the wonderful white sandy beaches at Ballyconneely and Roundstone, and sample the fresh seafood dishes in the bars and restaurants along the way.
Leave Clifden on the R341 signposted for Ballyconneely and Roundstone. You will pass by the site of the crash-landing of the first transatlantic flight by Alcock & Brown in 1919, as well as the old Marconi transatlantic wireless station. Prepare yourself for ample photo opportunities along this route!

Connemara National Park and Visitor Centre is accessed from Letterfrack, Connemara, Co. Galway. It covers some 2,957 hectares of scenic mountains, expanses of bogs, heaths, grasslands and woodlands. Some of the Park’s mountains, namely Benbaun, Bencullagh, Benbrack and Muckanaght, are part of the famous Twelve Bens or Beanna Beola range. The Park was established and opened to the public in 1980 and has since hosted hundreds and thousands of visitors. No visit to Connemara is complete without visiting and exploring the Connemara National Park.
Much of the present Park lands formed part of the Kylemore Abbey Estate and the Letterfrack Industrial School, and the remainder having been owned by private individuals. The southern part of the Park was at one time owned by Richard (Humanity Dick) Martin who helped to form the Society for the Prevention of Cruelty to Animals during the early 19th century. The Park lands are now wholly owned by the State and managed solely for National Park purposes.
There are four walking and hiking trails in Connemara National Park which offer looped walks of the majestic Diamond Hill. Each of them can be accessed from the Visitor Centre situated close to Letterfrack Village. As well as these beautiful and scenic walks and hikes, the Park also offers a variety of activities including childrens activities, children’s playground, audio-visual theatre, information desk, tea rooms, guided walks and evening talks.
The birdlife of the Park is varied. Meadow pipits, skylarks, stonechats, chaffinches, robins and wrens are just some of the common song-birds within the Park. Birds of prey are sometimes seen, usually kestrel and sparrowhawk, with merlin and peregrine falcon making occasional visits. Winter brings an increase in the numbers in the Park of some species native to Ireland such as woodcock, snipe, starling, song thrush and mistle thrush, augmented by visitors from other parts of Ireland and abroad as well as winter migrants from north Eastern Europe such as redwing and fieldfare.
Rabbits, foxes, stoats, shrews, and bats are often observed at night.
The largest mammal in the Park is the Connemara Pony. Although a domestic animal this pony is very much part of the Connemara countryside.
Admission into the park and events is free. 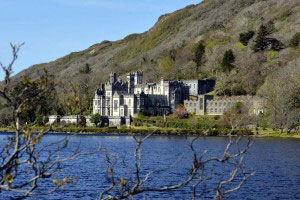 As well as the being an iconic building in a beautiful location Kylemore Abbey is also home to the Sisters of the Benedictine Order, in Ireland, since 1920. Today it is still a working Abbey where the sisters live, work, pray and welcome visitors from around the world. On our grounds are the very beautiful Victorian walled Gardens, restored and open to the public since the year 2000. These are the largest Victorian Walled Gardens in Ireland and a heritage garden: using only Victorian gardening methods as well as plant seeds and strains from the 1800’s. Hidden in the woods you will also find the stunning Gothic Church built for Margaret Henry the woman who inspired the building of Kylemore Castle in the late 1860’s. Her husband Mitchell Henry was an entrepreneur, surgeon, politician and social reformer who transformed this area of bog land in the desolate west into a virtual paradise of comfort and innovation in the 1800’s. Tragically Margaret died at the age of 45 while on holiday to Egypt in 1874. Henry returned to Kylemore where he lived until 1903 and was finally laid to rest by Margaret’s side, in the little mausoleum on the grounds of the Estate. Today Kylemore offers the ideal destination with something to offer everyone from the very young to those a little more advanced in their years!
On the estate you will find our award winning Mitchells self-service restaurant as well as a delightful Tea House located just outside the walls of our Victorian Garden. Visit the restored rooms of the Abbey, The Gothic Church and the Gardens. Avail of our shuttle bus service to ferry you between the Abbey and Gardens or take your time to stroll along our beautiful tree lined avenues. Complimentary History talks given by our expert guides take place three times a day in the Abbey front Hall. Throughout the Summer Months a series of Choral Performances will be taking place in the Gothic Church, also included in your entry ticket fee. For Children we have a play trail running along the avenues, colouring in the restaurant and the chance to make a wish at the Giants wishing stone. Whether living in or just visiting Connemara don’t miss your chance to come and have the Kylemore Experience you won’t regret it!